Wishing Her Well in Her Kobayashi Maru 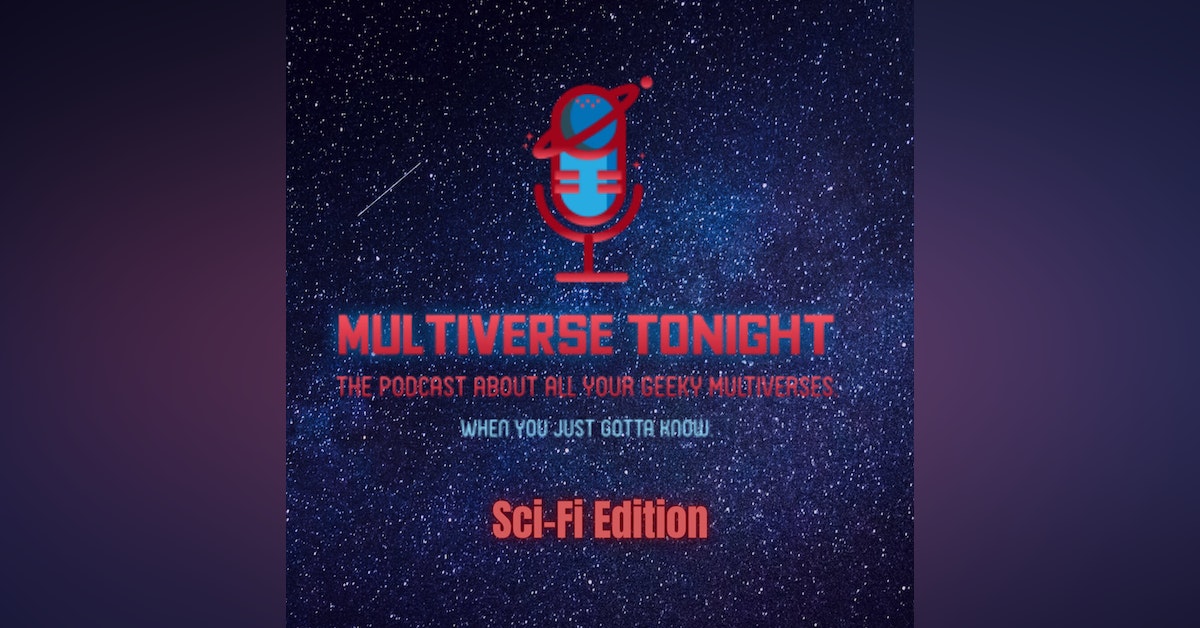 On the sci-fi edition, Gina Carano got fired, period. , win at the Kobayashi Maru and win prizes and we remember SciFI Author James Gunn. All That and More on the SciFi edition of Multiverse Tonight!

Tonight! Test the Kobayashi Maru, You might have an opinion about Gina Carano, I do not and we remember Sci-Fi Author James Gunn.  All that and more on the Sci-Fi Edition of Multiverse Tonight!

Hello and Welcome to the SciFi Edition of Multiverse Tonight Episode 114.

Let me start off by saying this, I don’t care about Gina Carano’s firing. There I said it. She opened her mouth, inserted foot and got fired. Plain and simple. It wasn’t cancel culture. She wasn’t canceled by Liberals. She made a bad judgment call. All we can do is hope that she learns from her mistakes and grows from it. I wish her well in her future endeavors.

Star Trek fans can now try their hands at the classic no-win scenario in a new browser-based game from Scopely. Star Trek Kobayashi Maru lets players play the ultimate test/life lesson for Starfleet cadets. Scopley says that the game is unbeatable and they even released trailer with George Takei warning fans not to bother trying to beat it. Scopely claims that the odds of beating the game are one in ten thousand, and to add some incentive, the three fastest players to defeat the simulation will win prizes like a Paramount Plus Lifetime Subscription and some limited edition Star Trek collectibles.You can find the game at KobayashiMaru.com

So what happened to Michael Burnham during the year she waited for the Discovery to show up? We will get the answers in a new novel. Star Trek Discovery Wonderlands from author Una McCormack will follow Burnham’s adventures with Book. Here’s the synopsis quote "In a desperate attempt to prevent the artificial intelligence known as Control from seizing crucial information that could destroy all sentient life, Commander Michael Burnham donned the 'Red Angel' time-travel suit and guided the USS Discovery into the future and out of harm's way. But something has gone terribly wrong, and Burnham has somehow arrived in a place far different from anything she could have imagined—more than nine hundred years out of her time, with Discovery nowhere to be found, and where the mysterious and cataclysmic event known as "the Burn'' has utterly decimated Starfleet and, with it, the United Federation of Planets. How then can she possibly exist day-to-day in this strange place? What worlds are out there waiting to be discovered? Do any remnants of Starfleet and the Federation possibly endure? With more questions than answers, Burnham must nevertheless forge new friendships and new alliances if she hopes to survive this future long enough for the Discovery crew to find her...." The book is out on May eighteenth,

Also coming out this August will be a prequel novel for Star Trek Picard’s Captain Cristobal Rios. Star Trek Picard: Rogue Elements by John Jackson Miller is the story of Rios’ life after he left Starfleet. Here’s the synopsis: "Starfleet was everything for Cristóbal Rios—until one horrible, inexplicable day when it all went wrong. Aimless and adrift, he grasps at a chance for a future as an independent freighter captain in an area betrayed by the Federation, the border region with the former Romulan Empire. His greatest desire: to be left alone.

"But solitude isn't in the cards for the captain of La Sirena, who falls into debt to a roving gang of hoodlums from a planet whose society is based on Prohibition-era Earth. Teamed against his will with Ledger, his conniving overseer, Rios begins an odyssey that brings him into conflict with outlaws and fortune seekers, with power brokers and relic hunters across the stars.

"Exotic loves and locales await—as well as dangers galore—and Rios learns the hard way that good crewmembers are hard to find, even when you can create your own. And while his meeting with Jean-Luc Picard is years away, Rios finds himself drawing on the Starfleet legend's experiences when he discovers a mystery that began on one of the galaxy's most important days."

Jackson has described the book as his quarantine novel tweeting quote "I specifically asked both to write about Rios — and also to write a book that would be FUN, something readers could really look forward to and would enjoy," the book will be out on August seventeenth.

Another new novel in the offing is Star Trek The Next Generation Shadows Have Offended by new Star Trek novelist Cassandra Rose Clarke. The book takes place during the series’ seventh season. Here’s the synopsis quote "The USS Enterprise has been granted the simple but unavoidable honor of ferrying key guests to Betazed for a cultural ceremony. En route, sudden tragedy strikes a Federation science station on the isolated planet Kota, and Captain Jean-Luc Picard has no qualms sending William Riker, Data, and Chief Medical Officer Beverly Crusher to investigate. But what begins as routine assignments for the two parties soon descends into chaos: Picard, Worf, and Deanna Troi must grapple with a dangerous diplomatic crisis as historic artifacts are stolen in the middle of a high-profile ceremony…while nothing is as it seems on Kota. A mounting medical emergency coupled with the science station’s failing technology—and no hope of rescue—has Doctor Crusher racing against time to solve a disturbing mystery threatening the lives of all her colleagues…." The novel will be out on July Thirteenth.

The Mandalorian actress Gina Carano and Disney have cut ties after the actress made controversial remarks. The actress shared some controversial and anti-Semitic posts on her social media. In a statement Lucasfilm said quote “Gina Carano is not currently employed by Lucasfilm and there are no plans for her to be in the future,"  "Nevertheless, her social media posts denigrating people based on their cultural and religious identities are abhorrent and unacceptable.” unquote. The fallout from the firing of Carano includes being dropped by talent agency UTA and the cancellation of the Cara Dune action figure. Fans have suggested WWE’s Sonya Deville or Lucy Lawless should take up the part, but I think it’s more than likely that they’ll just kill off the character.

Could Darth Maul be making a live-action come back soon? The Villian, last seen at the end of Solo A Star Wars Story hasn’t been seen in live-action since. However recently Maul actor Ray Park posted a picture of Maul’s headpiece with the caption quote Meet me on Dathomir! Sith Life! Unquote So could the villain have a comeback coming, say on The Mandalorian or Obi-Wan Kenobi? No one knows for sure. But we will keep an eye out for it.

The Nintendo Switch will be getting a new free-to-play squad-based Star Wars game. Star Wars Hunters was announced at the first Nintendo Direct presentation in over a year. Not much was revealed about the game but it was established that it will exist in the time between Return of the Jedi and The Force Awakens.

Ghostbusters Afterlife has officially been given a rating of PG13 by the Motion Picture Association of America. Not really much of a shock there, it earned the rating for quote "supernatural action and suggestive material.” unquote The movie is due out on November eleventh.

Zack Snyder’s Netflix movie Army of The Dead has a release date, May twenty-first. Army of the Dead follows the aftermath of a zombie outbreak in Las Vegas and the group of mercenaries who venture into the quarantine zone to pull off a big heist. The pic has an all-star international cast including Dave Bautista,  Ella Purnell, Ana De La Reguera, Theo Rossi, Huma Qureshi, Omari Hardwick, Tig Notaro, Hiroyuki Sanada, Garret Dillahunt, Matthias Schweighöfer, Raúl Castillo, Nora Arnezeder, and Samantha Win.

The house that was Buffalo Bills in the movie The Silence of The Lambs can be your next sleepover as the current owners have turned it into a sort of Bed and Breakfast. The house, located in Perryopolis, Pennsylvania has a website buffalobillshouse dot com where you can book guided tours, special events, and weddings and sign up to stay overnight, although it doesn’t list how much that costs. Perryoppolis, by the way, is in the Pittsburgh metro area, a small town of about 1700 people.

Edger Wright has signed on to direct a new adaptation of Stephen King’s The Running Man for Paramount Pictures. The novel follows a man who attempts to win a reality game show where the only objective is to stay alive. The novel was famously adapted into a movie of the same name starring Arnold Swarzenegger and tv show host/ actor Richard Dawson. Michael Bacall has been tapped to pen the screenplay.

Scifi author and editor James E Gunn passed away in Lawrence, Kansas on December twenty-third. His death was announced by the University of Kansas where he taught and later founded the Gunn Center for the Study of Science Fiction. Gunn’s best-known work was The Immortals which was adapted into an ABC movie called The Immortal in 1969 and later a short-lived tv series. Another of his novels, The Listeners was called by Carl Sagan quote “one of the very best fictional portrayals of contact with extraterrestrial intelligence ever written.” unquote Overall Gunn edited ten anthologies and wrote 30 books and 100 short stories. Gunn was honored in 2007 as a grandmaster of the Science Fiction writers and Fantasy Writers of America and was inducted into the Hall of Fame in 2015. He also won a Hugo Award for his study Isaac Asimov: The Foundations of Science Fiction. He is survived by his son Kevin.

Thanks for watching the SciFi edition of Multiverse Tonight, We will be back in two days with a new comic book edition and two weeks with a new SciFi edition. Now please exit the universe in an orderly fashion. Good Night!