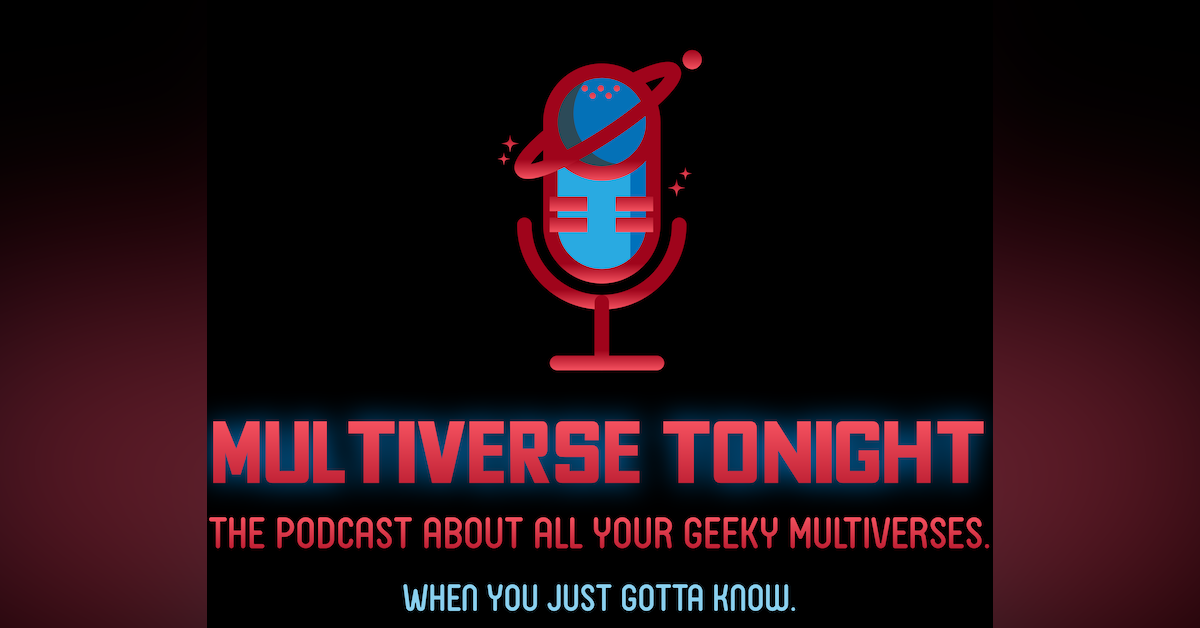 On the sci-fi edition, Doctor Aphra gets an award, Paramount cuts a potential movie from the herd,The Emmy nominations are out and Genre TV did very well and we remember Wilford Brimley,  All that and more on this edition of Multiverse Tonight!

Tonight! Warner Herzog takes a break, Paramount puts the breaks on one of the Star Trek movies and Genre TV does well at the Emmy nominations. All that and more on the SciFi edition of Multiverse Tonight!

Welcome to the SciFi edition of Multiverse Tonight episode 88. I’m on vacation from my day job this week, gonna try to catch up on some books and movies that have been piling up. One thing I haven’t been missing is Star Trek Lower Decks. I loved the first episode, very funny, full of Star Trek references. This show should be taken as a love letter to the history of Star Trek. Stop thinking about it as a serious show, it’s not it’s a comedy, it’s not here to be an allegory or a morality tale, think of it as the dish of ice cream. I am looking forward to the entire season, well done CBS. Let’s get on with the news.

The Mandalorian novel from Del Rely has been delayed. The novel by Adam Christopher will now be out in the fall of 2021.

Spekind of the Mandalorian, Wwarner Herzog plans on taking a break from acting to get back to his own films. Speaking with the BFI at Home series on Youtube. He said “I have done a lot more acting recently, and I have to review it, because it takes away too much attention from the real things that I’m doing.” unquote. His documentary Fireball has been acquired by Apple TV Plus.

The new Star wars game show Star Wars Jedi temple Challenge host Ahmed Best speaking with the Coffee with Kenobi podcast revealed the origins of his character on the show Kelleran Beq saying quote "In my idea of Kelleran Beq, the reason why he has a purple lightsaber and the purple kyber crystal is because, in my mind, purple lightsaber wielders have an intimate relationship with both the Light Side and the Dark Side," Best revealed to Coffee With Kenobi. "It takes a special Jedi to be able to balance those two."

He added, "'Kelleran' is a name that I came up with because I like this idea of names being derivatives. 'Wilhelm' automatically turns into 'William' after generations and generations and accents change and regions change and I wanted to find a way to tie the sequels and the prequels together in Kelleran Beq. And I played a character, because of Anthony Daniels, in [Star Wars:] Attack of the Clones named 'Achk Med-Beq,' which was so duly named, and 'Kelleran,' to me, sounds like the origins of the name 'Kylo Ren,' so I wanted to have Kelleran be the root name to Kylo Ren and as you go down generations, you get to Kylo Ren." unquote Okay.

The comic book Star Wars Doctor Aphra, won the award for Outstanding Comic Book at the GLAAD Awards, it beat out BOOM!'s The Avant-Guards and Lumberjanes, Comixology's Liebestrasse, DC Comics' Harley Quinn: Breaking Glass, First Second's Bloom and Laura Dean Keeps Breaking Up with Me, Image's Crowded and The Wicked + The Divine, and Marvel's Runaways. Doctor Aphra was created for the Star Wars Darth Vader comic. The Doctor is a morally amibquous acchelogist and a lesbian.

PS5 and Xbox Series X players will be getting a  Star Wars game. Star Wars Squadron is coming to the next gen consoles, however it will not have any upgrades over it’s planned versions on PS4 and Xbox One. Here’s the blurb "Master the art of starfighter combat in the authentic piloting experience Star Wars: Squadrons. Buckle up and feel the adrenaline of first-person multiplayer space dogfights alongside your squadron. Pilots who enlist will step into the cockpits of starfighters from both the New Republic and Imperial fleets and fight in strategic 5 vs. 5 space battles. Modify your starfighter and adjust the composition of your squadron to suit varying playstyles and crush the opposition. Pilots will triumph as a team and complete tactical objectives across known and never-before-seen battlefields, including the gas giant of Yavin Prime and the shattered moon of Galitan." Star Wars Squadron Will be out on PS4, Xbox One and PC on October second and on PS5 and Xbox Series X sometime in November.

A bit of science news now, usually we talk of Star Trek inspiring scientific advances, this time it’s Luke Skywalker's prosthetic hand that has inspired researchers at the National University of Singapore to bring the feeling of touch to electronic skin. According to scientists at the university they have built electronic skin that can be used by robots and prosthetic limbs that recreate the sense of touch. The e-skin known as Asynchronous Coded electronic Skin consists of a network of sensors that are connected via a single electrical conductor and can give the robots or humans with a prosthetic limb  the ability to feel pain, temperature, shape and texture. Assistant professor Benjamin Tee in an interview with Reuters said quote "When you lose your sense of touch, you essentially become numb ... and prosthetic users face that problem,"

"So by recreating an artificial version of the skin, for their prosthetic devices, they can hold a hand and feel the warmth and feel that it is soft, how hard are they holding the hand." unquote This would be a big boost to amputees, very nice.

Breaking News! Nickelodeon and CBS Television Studios announced that award-winning director and producer Ben Hibon (Codehunters) would direct, co-executive produce, and act as the creative lead of Nickelodeon's upcoming animated series Star Trek: Prodigy. The CG-animated series follows a group of lawless teens who discover a derelict Starfleet ship and use it to search for adventure, meaning, and salvation.

Paramount Pictures has decided to not go ahead with Noah Hawley’s Star Trek movie. If you’ll remember Hawley’s movie was given the greenlight by the studio.. The studio had also been working on a movie with Quentin tarantino, no word on the fate of that one. No word on the next movie in the franchise or if they’ll just stick to tv shows for now.

Congratulations to Sonequa Martin Green on the birth of her daughter Saraiyah Chaunte Green. Sonequa shared the news on Instagram with photos of her and her husband Kenric Green. On Instagram, Martin-Green writes, "We welcomed our sweet baby girl last Sunday, July 19th at 8:32 in the morning. It was a profoundly beautiful home birth, and now both of our children have been born in the water. We never felt that anything was missing, but now that she’s here, we feel a perfect sense of completeness. Her name is Saraiyah Chaunté Green, she’s got Mommy’s initials and Mommy’s middle name. She’s utterly perfect, just like her brother. Thanks be to Yeshua, she’s the final piece to our Love-given puzzle." unquote.

Star Trek Lower Decks is out and animation studio Titmouse has started an exclusive t-shirt club featuring ten  exclusive shirts, one for each new episode. Each shirt is available for one week between each new episode and then it's gone forever. . You can get them at titmousestuff.com for $20 dollars.

Courteney Cox is returning to the  role of Gale Weathers for the upcoming Scream reboot. Spyglass Media Group and Paramount made the announcement  and they also said filming should start later this year in Wilmington, NC. The movie is being directed by directors Matthew Bettinelli-Olpin and Tyler Gillett with a script written by James Vanderbilt and Guy Busick. Courtney is joined by David Arquette.

Christopher Eccleston will be reprising the role of the Ninth Doctor for the Audio series Doctor Who The Ninth Doctor Adventures from Big Finish Productions and BBC Studios. The audio series will be released as four separate box sets each with three episodes The first will be released in May 2021. No plot details at this time. Eccleston in a statement said quote "After 15 years, it will be exciting to revisit the Ninth Doctor's world, bringing back to life a character I love playing” No word on any plot details.Each volume will run about two hundred forty minutes and have a price point of 19.99 with the entire series will cost 88 dollars.

Watchmen made off with the most nominations of any show with 26 nominations including limited series, lead actor in a limited series or movie for Jeremy IronsLead Actress in a limited series for Regina King,Supporting actor and actress nominations for Yahya Abdual-Mateen II, Jovan Adepo, Louis Gossett Jr. and Jean Smart and several technical emmy nominations. Also receiving nominations were The Good Place, Westworld, Big Mouth, Central Park, The Simpsons, Bob’s Burgers , Rick and Morty, BoJack Horseman, Robot Chicken, The Handmaid's Tale, What we do in the shadows and more. The Emmy Awards Will be hosted by Jimmy Kimmel on ABC on September twenty. https://variety.com/2020/tv/news/emmys-2020-nominations-complete-list-1234715939/

Tonight we say goodbye to the legendary pitchman for Quaker Oats and actor Wilford Brimley. Anthony Wilford Brimley was born in Salt Lake City on September twenty seventh 1934. He dropped out of high scheel at the age of fourteen and worked as a cowboy. He joined the Marines during the Korean War and served in the Aleutian Islands for three years. He also later worked as a bodyguard for Howard Hughes, a ranch hand, wrangler and a blacksmith. While blacksmithing for film and television, at the encouragement of his friend actor Robert Duvall, he started acting during the 1960’s as an extra and stunt man in Westerns like Bandolero and True Grit. His big break came when he was cast on The 70’s tv series The Waltons showing up in eight episodes. From there he starred in films such as The China Syndrome, The Thing, Cocoon, Remo Williams The Adventure Begins, Cocoon The Return, The firm among others. His television roles included appearances on Kung Fu, the tv film Ewoks: The Battle for Endor, Walker Texas Ranger and Seinfeld. He also was a frequent star in commercials for Quaker Oats, Liberty Medical and the American Diabetes Association. Wilford was diagnosed with type II diabetes in 1979. Wilford came down with a kidney condition in June of 2020 and died on August first in a hospital in St George Utah, he was eighty five.