Put Snoopys Universe Next to Spawns 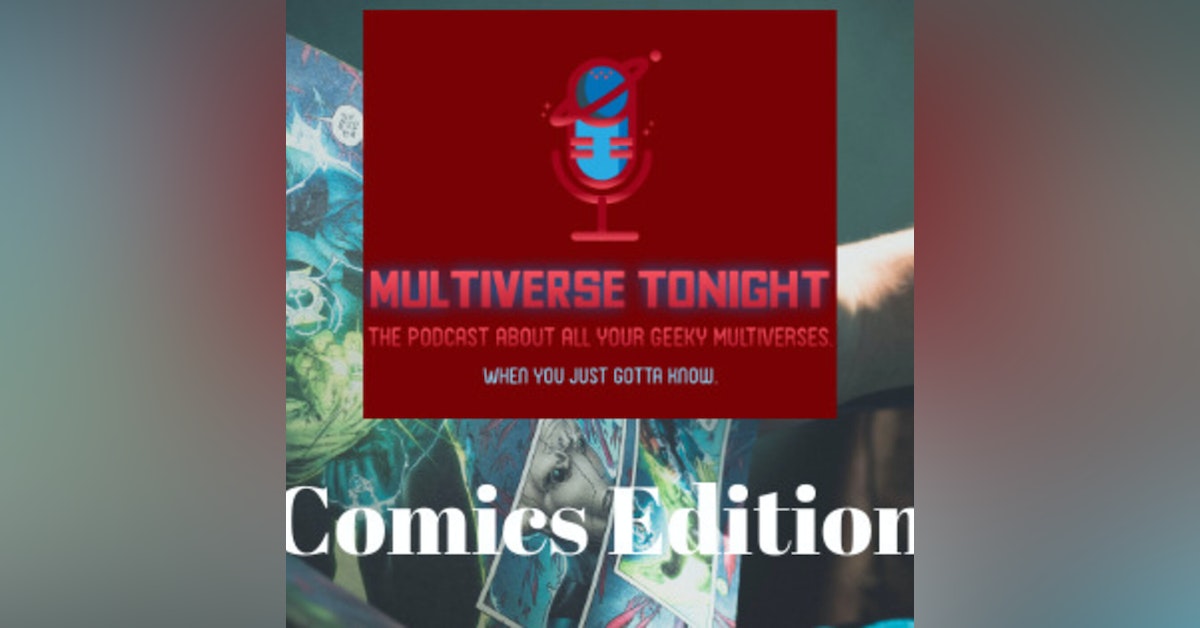 On The Comic Book edition, Justice is Grey, Sam Raimi composes Strange music and there are rules for making a Snoopy show.  All that and more on the Comic Book Edition of Multiverse Tonight!

Tonight! Wonder Girl is a nogo at The CW, Black Widow will not stream before its time and The Peanuts Universe has unbreakable rules. All that and more on the Comic Book edition of Multiverse Tonight!

Welcome to episode number 115 of Multiverse Tonight! The cold days of Winter look to be over, the snow has melted, the geese are headed back North.

Snyder also revealed what is planned for the IMAX remaster of Batman V Superman Dawn of Justice. Saying on Minutemen quote "I believe so, I believe so. Blu-ray, 4K. I just approved the Blu-ray box the other day. So it for sure will exist on Blu-ray, and then I think it will exist on HBO Max," "Look, I have to confirm now, but for sure we've been talking about the release. It's meant to, especially for the special edition, it’s to replace the one that was kind of messed up a little bit. The Blu-ray, I think, was okay. The 4K was [messed up]."

"I remember watching it on Apple movies or wherever it was, or somewhere, and going, 'Wait, what? That's not correct.' The reds were all blocked up, it was really weird."

The possible Wonder Girl series will not be moving forward at TheCW. The series, which would have centered on the character of Yara Flor was announced back in November. Yara is the daughter of an Amazonian and a Brazillian river god and is getting her own series as part of DC’s Future State event. Writer/ producer Dailyn Rodriguez shared on social media quote "So, some sad news," producer Dailyn Rodriguez shared on social media. "For all of those asking, Wonder Girl is not getting picked up at the CW. I was very proud of the script I wrote. Wish I could've shared the world I created, but unfortunately, it wasn’t meant to be. Thanks for everyone's enthusiasm. It meant a lot to me."

A new Constantine series is in the works, the Hollywood Reporter has confirmed that JJ Abrams will produce a new series for HBO Max with British Novelist Guy Bolton chosen to pen the pilot script and they are looking for an actor of color to fill the role.

Dwayne Johnson’s Black Adam is in negotiations to cast Marwan Kenzari from The Old Guard in the movie. The film is set to start filming in Atlanta in April.

And while we’re on casting news, The Flash movie has cast Sasha Calle as Supergirl. Calle is best known for her work on the soap opera The Young and the Restless. The Flash is currently due in theaters on November fourth of next year.

Marvel Studios box office record for highest gross is a single day in a single market has been broken in China by the movie Detective Chinatown 3, the movie raked in a gross of 397 million in its opening weekend, dwarfing Endgame’s North American opening of 357 million back in 2019.

Disney confirms that Black Widow will be a theatrical only release. During Disney’s quarterly investor call Disney CEO Bob Chapek, when asked about the release of Black Widow said that the plan still remains to open the film in theaters, however, the release date is still up in the air.

Episode 1.02 - The M.O.D.O.K. That Time Forgot In an effort to win back his wife Jodie, M.O.D.O.K. takes her traveling through time to a Third Eye Blind concert they missed years ago. There they are attacked by a college-aged M.O.D.O.K. who steals their time machine and strands them in past.

Danny Elfman has signed on to score Sam Raimi’s Doctor Strange and the Multiverse of Madness, this of course will not be the first time that the two have worked together they did Darkman, Spider-man, Spider-man 2, and Oz the great and powerful.

The MCU Disney Plus series Ms. Marvel has cast relative newcomer Laurel Marsden as Zoe Zimmer in the series. In the comic book, Zoe Zimmer is to Kamala Kahn what Flash Thompson is to Peter Parker. The series is due out by the end of the year and is currently in production in Atlanta.

The CW is has ordered a remake of the USA sci-fi series The 4400 straight to series. The series will be like the original and will feature the mysterious return of 4400 individuals who disappeared over the past 100 years, only to have been returned, not having aged a day with superhuman abilities. CBS studios is behind the show with Ariana Jackson, Anna Fricke, and Laura Terry producing.

South Park will be doing a new follow-up special to last year’s South Park Pandemic Special. This time it’s the South Park The Vaccination Special. In South ParQ The Vaccination Special, the residents of South Park are clamoring for the Covid-19 vaccine. A new militant group attempts to stop the boys from getting their teacher vaccinated. The previous special saw Randy seizing on a growing pot market as he comes to terms with his role in the Covid outbreak. Cartman, still in pajamas from remote learning, is none too thrilled about returning to the “slavery” of the school classroom where teachers seem to have been replaced by cops. The special episode will air on Comedy Central and MTV2 on Wednesday, March tenth at 8 Eastern and Pacific.

Apple TV Plus’ The Snoopy Show showrunner Mark Evestaff told collider that the Peanuts Universe has rules that each episode must abide by, these rules were created by Peanuts creator Charles Shulz. Evestaff told Collider quote "One of them is no adults, which is neat because it forces the kids to solve their own problems. There's also a no parents allowed thing,"

"One of the rules is that when Snoopy is in his fantasies, you can’t see the bottom of the dog house because of the idea that Snoopy doesn't actually go anywhere. That's a challenge, but also a nice idea to carry through, and we've certainly been faithful to that." "And then, another one is that you never see the inside of Snoopy's house, which is a fun conceit for us to play with. He has a pool table in there, he's got a pool, he's got a Van Gogh, and he's got whatever you need with cartoony logic." "Another one is no technology past around 1970, so you won't see any cell phones and you don't see any computers. The good thing is that these kids are often playing outside so that never came into play. If you need a cell phone to tell your story, unless it's a great story, I think you can do without that. There's lots of fun to be had, but those are some of the ground rules we played with when we were making the show." The Snoopy Show is out now on AppleTV Plus.

The Addams Family’s Wednesday Addams will be getting her own live-action spinoff at Netflix, according to Variety the series has been given an eight-episode order and is described as a sleuthing, supernaturally infused mystery charting Wednesday Addams’ years as a student at Nevermore Academy. She attempts to master her emerging psychic ability, thwart a monstrous killing spree that has terrorized the local town, and solve the supernatural mystery that embroiled her parents 25 years ago — all while navigating her new and very tangled relationships at Nevermore. The show is being created/show run and executive produced by Al Gough and Miles Millar. They will be joined as EP’s by Tim Burton who will also direct. No other details have been given.

A third Paddington movie is in the works, representatives from StudioCanal told Variety, no details as of yet, except that it will not have Paul King directing, he’s currently busy directing Warner Bros Wonka, set to be out in March of 2023.

Jane Fonda will be playing the role of The Dragon in Apple Plus’ upcoming animated movie Luck. Luck comes from Apple and Skydance Animation and stars The Dragon, the exuberant CEO of Good Luck and the luckiest ancient being in all the land. But when bad luck starts to spin out of control, Fonda's character must face her fears or risk losing good luck forever.

Rick and Morty writer Alex Rubens revealed on Twitter just how far the writers have gotten on writing the show. He posted quote "Am I allowed to say we started writing Rick and Morty Season 7? (If not we didn't and I'm not,)" unquote. That’s pretty good, season five of the sow hasn’t arrived yet and no release date for the season has been given.

Spawn creator and Image President Todd McFarlane has announced his intent to create his own multi-character, interconnected comic book universe, The Spawn Universe this year. Starting with Four ongoing series this year.

Todd made the announcement during a first look presentation at the Annual Comics PRO Conference. Spawn will be the forefront of the initial launch of new titles, but the long-term goal is that Spawn will become just one of many characters.  This begins in June with Spawn’s Universe Number One then heads to King Spawn Number One, which will be the first new monthly issue number one for Spawn in 28 years. In October, Image will release Gunslinger Spawn and then a new team book titled The Scorched which will band five characters together. This time around it will be Spawn, Redeemer, Gunslinger, Medieval Spawn, and She-Spawn.